This Christmas was a big deal for me and Jacob (though he firmly declared there was nothing to be nervous about until the whole thing was over).  I made Christmas brunch for the family on Christmas day.  THE FAMILY= His family + my family, the first time our parents would meet. Since we’ve been dating for nearly two years we have both had plenty of time to get used to the others’ parents and we both feel completely comfortable with the other side.  Still.  His parents.  My parents.  (Plus Barbara and Mel.)  Nerves were still bound to happen, right?

I planned the menu a month in advance.  I had a secret Pinterest board going where I would add recipes, consider recipes, winnow recipes down until I had the perfect list.  Jacob kept trying to add things when we talked about the menu and I would just glare at him and tell him this was my deal (thankfully he’s so easy going he just backed away from the crazy lady.)  He doesn’t read my blog, but honey, I promise next year you can help plan the menu.
The plan was:

Jacob’s Mom added some orange pastries and scones to the table and I also put out some gingerbread cookies and peanut butter snickerdoodles out on the sideboard because it felt bare. 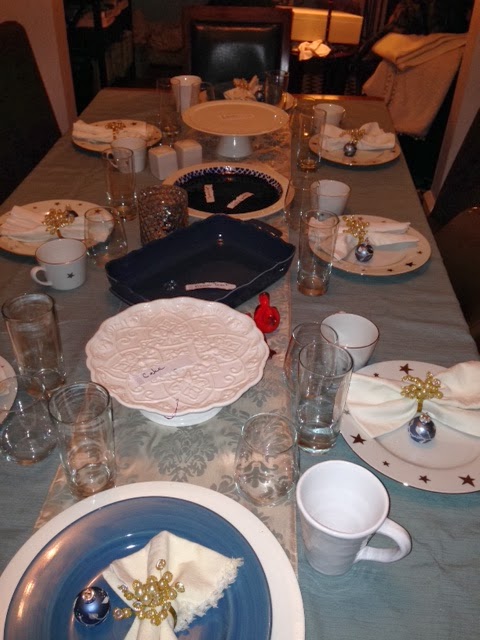 Monday night I pulled out all the dishes and linens to do a test run of table setting to make sure I had it all figured out.  Maybe that’s a little crazy – but it did let me know that I was one white napkin short so I had to go foraging in packed linens to fix that. (Thankfully I didn’t need to go to the store, I was sick of crowds.) I also realized that it was going to be a challenge to fit all of the serving dishes on the table, so when Christmas eve came and we were doing prep after we got home from our family gathering in Anamosa I didn’t feel bad about cutting the pizza from the menu line up.

And, when all was said and done, it turned out great.  Our parents got along fine, everybody found things to talk about, we all enjoyed the food and the sangria, no cats landed in anyone’s plate, but the dog did get banished to the basement early for jumping on my Mom who just doesn’t need that sort of thing.  I was busy making sure everyone had drinks and other nervous silliness, so didn’t get photos like I should have.

One of the great things about this menu was that it was all set up to leave very little last-minute work so I didn’t need to be hiding in the kitchen.  The french toast is a dish you prepare the night before and just toss in the oven, we baked the quiche ahead of time and served it at room temperature, the sangria was mixed hours ahead of time and we prepped the filling for the spinach cups the night before so they just need to be filled and baked along with the french toast.

Some reviews of the recipes in case you want to try them (you can link from my Christmas Brunch Pinterest board, I unlocked it.)

The french toast is a dish I’ve made for several brunches and is a staple in my go-to recipes.  I serve it with maple syrup instead of worrying about a citrus syrup like the recipe says.

The quiche was a new recipe for me and I was pretty intrigued by the hash brown crust – getting all of your omelet ingredients into one pan. I wasn’t so sure about the pancetta when I was cooking it up, the smell was odd, but it tasted great in the quiche. The hash brown crust turned out great (I used packaged hash browns instead of shredding my own potatoes this time) and it was a nice, hearty quiche.  Everybody at the table enjoyed it.

The spinach cups are going to go into our arsenal of last-minute appetizer ideas.  They were easy and elegant looking. We made them in mini-muffin size instead of regular muffins, so got 2 dozen out of the recipe with some leftover filling (used 2 puff pastry sheets).

The cake was absolutely delicious and so pretty with so very little work.  The red cranberries inside the white cake were lovely, and the sour cream made it dense and rich.  I wasn’t so happy with the white chocolate drizzle – I opted just to melt the white chocolate without adding any shortening to it so it hardened back up to a solid and broke when we cut it.  I think I’d swap that out for a thinned buttercream next time, just light enough to drizzle without going transparent.

And who doesn’t love sangria?  Not this girl…and the fact that I finally chilled out was probably due, in part, to how well the day went and in part to the fact that I was the only one having second…and maybe thirds of the sangria.

I’m still interested in trying the butternut squash pizzas, and since I have all the ingredients (cheating on the crusts as pre-made flatbread) I plan to make those yet this week.  What else would I do with the sage in my fridge?

← Conquering Mocha Icebox Cookies
What is a Flower Frog? →